The Cascade Blues Association published and article about Julie Amici’s performance at the September meeting and the original article can be viewed here.

Here is the text from the article:

For the second set of the night we will be presenting Julie Amici, last year’s nominee for the “Best New Act” Muddy Award. Known for their spacious, intimate, and open sound, Dean and Julie have teamed up with Dan Gildea on guitar and Alan Jones on drums for their 2016 festival shows this summer. The addition of these two master performers have taken the band in a decidedly more powerful dimension suitable for the big stage. Alan Jones is also working as their producer for a new recording project coming out this fall.

“Julie Amici” is the collaboration between Julie and Dean Mueller that started in late 2014. Much like the name is a melding of the two, the music is much the same, combining Julie’s country roots and childhood dreams of singing jazz, with Dean’s deeply rooted blues foundation. 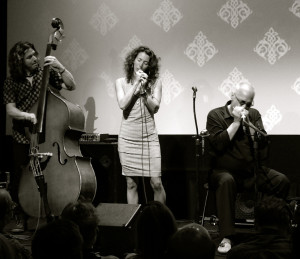 Julie’s strong yet sweet voice is reminiscent of the 50’s when female singers ruled the world of music, a time when jazz and blues co-mingled at the height of popular culture. Her repertoire combines the jazz of Billie Holiday with the soul of Nina Simone and the sophisticated country of Patsy Cline. Dean’s bass playing is rooted in the blues chops he earned playing with some of the finest blues legends in America and touring with the award winning international act, The Insomniacs. Over the last couple years the pair has performed as a duo as well as collaborated onstage with some of the finest musicians in the Northwest including Curtis Salgado, Chris Carlson, Alan Hager, Dave Fleschner, Henry Cooper, Carlton Jackson, Mark Shark, and many others.

Guitarist Dan Gildea teaches jazz guitar at Portland State University and has a lengthy list of acts he has performed with in the area aside from Julie Amici, including recent collaborations and tours with Earl Thomas and Dave Fleschner. Alan Jones is one of the premier jazz artists in Portland with a long resume of places he has studied, taught and performed with, including the late Portland great Leroy Vinegar as well as leading his own sextet. The addition of Gildea and Jones to Julie Amici makes this a powerful line-up that surely speaks for itself. 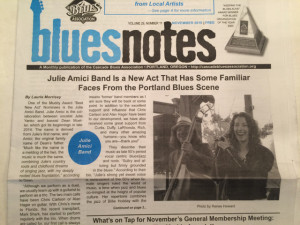 Julie Amici was the subject of a extensive front cover article in the Cascade Blues Association “Blues Notes” for November. This article contains some great background information on the band. You can Read The Article Here.

Lake Oswego, Oregon, – A new Patsy Cline Tribute show will be debuting November 16th at Lake Theater & Cafe, 106 N State St in Lake Oswego. The show is produced by Lake Oswego local Dean Mueller of Ripping Glass Entertainment, who has been hosting Music Mondays at the Theater since June of 2014.

The show will feature four Portland-based singers  who have emerged as the latest rising stars in Jazz/ Blues (Julie Amici), Country (Leslie Biea), Folk (Anna Hoone), and Americana (Jennifer Smieja). These immensely soulful singers, powerful in their individual styles, are backed by an all-star lineup: Dean Mueller on Bass, Mark Shark on guitar, Ian Miller on Pedal Steel ,and Carlton Jackson on drums. The combination of these lovely voices and seasoned musicians make for an inspired performance sure to bring back warm memories of classic tunes made popular by Patsy Cline.

Julie Amici, who calls Lake Oswego home, has recently been nominated “Best New Act” by the Cascade Blues Association. She performs with Dean Mueller regularly at the Theater with The Julie Amici Band. Julie brings an intimate and alluring sweet voice that melds jazz, blues, and country.

Jennifer Smieja, who recently released the well-received EP “To Measure the Sky” is a singer/songwriter with Midwest roots, who has a compelling voice and ability to beautifully deliver songs covering a wide range of styles and genres.

Leslie Beia has been a fixture in Portland’s underground country scene since 2011. Fronting her own honky-tonk band Leslie Lou and the Lowburners, the classic and critically-acclaimed country band Copper & Coal, she has since teamed up with one of Portland’s most integral and established musicians, Pete Krebs. Their project, The Earnest Lovers, is rooted in the sounds of vintage country and they are currently busy touring regionally, playing regular gigs in Portland, and writing their first full-length album.

Southern Oregon native Anna Hoone is a singer song-writer rooted in old-time gospel, country, and folk traditions. Her classic Americana songwriting and precise delivery shoots like an arrow straight to the heart.  Anna’s voice is soft and lilting, with an edge that comes from having lived the words she sings.

In addition to the talented vocalists, the band is made up of a cadre of award wining musicians, including Oregon Music Hall of Fame inductee Carlton Jackson; a national Blue Music Award nominee Dean Mueller;  Mark Shark, who and has appeared on 32 different recordings, including those by Bonnie Raitt and Jackson Browne; and Ian Miller, one of the most active and versatile musicians in the Portland country music scene.

Lake Oswego, Oregon, Oct 5, 2015 – Performing at the Lake Theater & Cafe on Oct 12th, the Lake Oswego-based band, Julie Amici has been nominated for a Muddy Award for “Best New Act” by the Cascade Blues Association (CBA). Ballots are cast by the CBA membership and will be awarded at the November meeting on Wednesday Nov 4th at the Melody Ballroom in Portland OR.

The show will feature the vocals of Julie Amici with Dean Mueller on bass, Alan Hager on guitar, and Carlton Jackson on drums. While this is the first nomination for the band, it’s members have garnered a long list of awards on their own. Dean Mueller received the same award in 2006, a best contemporary act award in 2007, and then a BMA nomination for Best New Act in 2008 as founding member of The Insomniacs. Alan Hager has received many Muddy awards and has been nominated every year since 1990. Carlton Jackson has also received a long list of awards and was inducted into the Oregon Music Hall of fame in 2008.
This backing band of Portland all-stars will be supporting one of the finest up-and-coming female vocalists on the West Coast. Julie’s strong yet sweet voice is reminiscent of the 50’s when female singers ruled the world of music, a time when jazz and blues co-mingled at the height of popular culture. Her repertoire combines the jazz of Billie Holiday with the soul of Nina Simone and the sophisticated country of Patsy Cline.
Every Monday the Lake Theater & Cafe brings world class music to Lake Oswego and this will be no exception. Come on out to help the band celebrate the nomination and experience a fresh take on a bygone era that is intimate, alluring, and hauntingly beautiful.
ALL AGES
Doors open at 6:00
Show starts at 7:00
Open seating Tickets $10
tickets available online at:
http://laketheatercafe.com/#music-monday

We are really pleased to be nominated for this award, much thanks to all that have joined us along the way: Curtis Salgado, Chris Carlson, Alan Hager, Mark Shark, and Carlton Jackson. Thanks also to our close musical family that have encouraged and inspired us!

Enter your name and email address below and you’ll receive Dean’s demo of Don’t Drift Away – FREE!